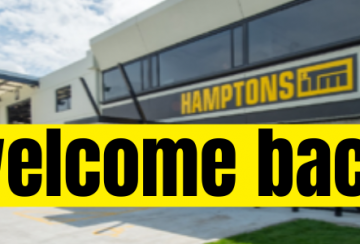 Autumn has arrived – “Season of mists and mellow fruitfulness” as Keats once wrote, and it’s time to sweep back the leaves and sing the praises of another one of Hampton’s unsung heroes – Sarah Gwilliams,

our accountant. Now there is the well-worn cliché that accountants are, ahem, a bit boring. But after digging deeper into Sarah’s background we can confirm that behind her cool calm façade, Sarah is someone who has thrown herself wholeheartedly into the world and has plenty of stories and experiences to share.

With her father working for the National bank, Sarah lived in both Wellington and Christchurch as the family moved on the bank’s whim before they finally settled for good in Christchurch just in time for Sarah to attend Christchurch Girls High. While at school, Sarah met with the school guidance counsellor and explained that she would love to do something with gardening and perhaps be a gardener, to which the counsellor replied, “Oh but it would be a shame to waste your math talent, you should be an accountant.” And so, the die was cast, and here we are years later with Sarah the accountant, who also happens to have an extremely beautiful, and might I add, plentiful, garden.

After studying and then working for three years to become a chartered accountant, it was time to spread her wings and see something of the world.

Sarah went off on her voyage of discovery, spending four and a half years overseas. Primarily based in London, she spent her winters working hard, and her summers partying harder as she travelled chasing the sun. A keen cyclist, as well as wine and cheese enthusiast, she once spent three months cycling through Spain, Portugal, and Morocco, living the simple life of sun, tent, wine and cheese, which sounds pretty good to me! She also spent a month biking around Ireland, which wasn’t quite so sunny, and it apparently rained every single day. No doubt the Guinness helped warm the cockles of her heart. She managed to see most of Europe, Scandinavia, Russia in this time, as well as parts of North Africa, before setting off on even further journeys.

We did ask how many countries Sarah has visited – too many to name and too many to count. However, she did mention that the seven months she spent travelling independently around Africa was a firm highlight, even if she still hasn’t yet told her mother about hitchhiking in South Africa. Don’t worry Sarah your secret is safe with us…

Returning to Christchurch after her world safari, Sarah settled down with a job at Click Clack, and then MacPac. Sarah met Matthew, her husband at a BBQ, which eventually led to a wedding (twentieth anniversary this year!), and a three-month sojourn through India, Nepal, Bali and Singapore.

Sarah became quite a foodie during her travels, something that carries on to this day. If ever you need a restaurant recommendation, a good recipe, or to know the best place to get good quality food, Sarah is the first on the list for a chat. She knows the ins and outs of most of Christchurch’s food scene, and is quietly working away improving her awareness of the wine scene…

Sarah arrived at Hamptons at the beginning of 2011, another momentous year for all sorts of reasons, and this year celebrates ten years with us. With her son currently learning to drive, Sarah still has plenty of excitement going on in her life and she continues to expand her horizons (learning Japanese at night school), but she still has time to dedicate to her ever-expanding and changing garden.

ITM’s 30th birthday is almost upon us, and we have cast our minds back 30 years to 1991 and tried to remember what the world was like back then. We’ve put together a quick snapshot of the year ITM was born and it’s a timely reminder of how far we’ve come in the last 30 years. It sure was a different era as some of the list below will show:

Here is Rowan talking about the Hot Deal for April. Come in and see us to check out  all the products we have in store.

On Saturday the 10th of April Hamptons will be hosting the ITM sponsored Apprentice Challenge.

If you, or someone you know is keen to be part of the action check out:

At Hamptons ITM we like to do our bit to help save the planet.

If you would like to have you Invoices and Statements emailed rather than posted please email admin@hamptons.co.nz or call us on 03 374 3333 and we will happily update this on your account.

Some of our regular visitors to Hamptons may have spied a familiar face working in the yard. Our own prodigal son Marshall has returned to the Hamptons family.

Marshall has previously worked for us to fund himself through University. After an absence of three years in which he attained his bachelor’s in Criminal Justice, he has now returned to the fold to assist Darren in the timber yard and do deliveries when required.

We welcome his return and friendly smile. He will continue to be an asset to Hamptons and being the youngest, he is once again suffering our brand of humour, although he has yet to fall for the left-handed hammer gag – but we’ll keep trying!

Take care out there…