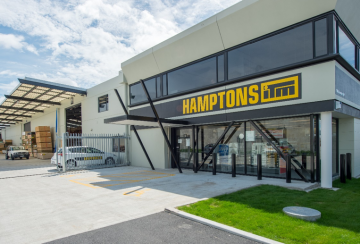 Welcome to the second edition of Hamptons Happenings.

In each issue of Hamptons Happenings, we’ll be introducing key members of our team.

This will give you a greater understanding of the people who help make Hamptons tick… while at the same time, it provides us with a great excuse to ask our colleagues all sorts of awkward, embarrassing and politically incorrect questions that we normally wouldn’t get away with!

We wanted to start with Mata.  Mata Tanoa-Kell is our receptionist extraordinaire at Hamptons and the first port of call for many … yet at the same time, she (sadly) doesn’t always get the opportunity to meet many of our customers face-to-face.

Given we’re obsessed about the building supply game the first thing we normally want to know about absolutely anything is (1) the length, (2) the width and (3) the linear or square meterage. We managed to find out the answer to the first question: Mata is 1.78m or 5.9ft… but in this instance, we certainly weren’t brave enough to go anywhere near the second two questions!

Mata is short for Matagofie which in Samoan means beautiful. When Mata isn’t hard at work at Hamptons she enjoys playing both volleyball and netball. She tends to alternate between the two sports, depending on which one most of her mates are playing.

Mata has a twin sister Azania who is currently on holiday in Germany with her boyfriend. We’ve been told it is extremely difficult to tell the two of them apart. We joke that if Mata ever starts replying to our questions with “Ja” and “Nein”, she may well have convinced her twin sister that it was her turn for a holiday.

For many tradies, keeping track of their Licensed Building Practitioner (LBP) points is both stressful and time-consuming.  That’s why the clever folk at ITM head office created the ITM App for builders.

This free App is available on both Google Play and the Apple store. It’s the easiest and simplest tool available to help you keep up with your LBP license requirements.

Here is a short video to explain features the app offers …

Check out the ITM App for Builders here!

You could be forgiven for thinking that plywood is a pretty boring manufactured wood product. But here are a few fascinating facts you may not have known about the humble ply!

Plywood is a product with endless possibilities and Hamptons ITM has made a name for itself by having one of the widest ranges of plywood in the country.

We’re now adding the final finishing touches to our Ferry Road premises. Our new trade store, warehouse and drive through are all working well. If you’re about to get underway with any new projects in 2019 ensure you give the team at Hamptons a call or get in touch with Mata on 03 374 3333 or admin@hamptons.co.nz