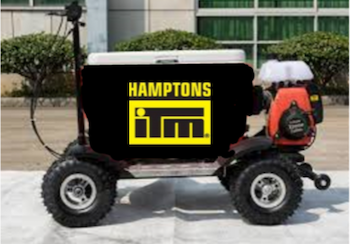 Welcome to the October edition of Hamptons Happenings.

In past issues of Hamptons Happenings… we’ve shared some information on various members of our team at Hamptons. We’ve done this unashamedly… because we’re pretty proud of our team in terms of their expertise, how long they’ve been at Hamptons and how well they know the building supply game and also our wonderful customers…

This month we thought we’d change tack slightly, pin our colours to the mast and show our 100% support for another team that we’re all pretty proud of…

Like the rest of the country, everyone here at Hamptons ITM will be absolutely glued to their televisions over the next few weeks cheering on the All Blacks as they look to secure their 4th Rugby World Cup title.

What you might not know is that in the competition’s history there have been 25 teams compete for the RWC… but the only teams to have ever made a RWC final are England, South Africa, Australia, France and New Zealand.

England is the only team from the Northern hemisphere to have ever won the RWC. As you think about the fact that only 5 teams in the world have ever made a RWC final… spare a thought for the poor old French, who have made 3 RWC finals and have lost all three. Something for our All Blacks to be wary of is the fact that the South African’s have never lost a RWC final. The South Africans made the RWC final in 1995 and 2007 and won both finals.

While we think about that… it’s good to also remind ourselves that every single team at the RWC will be feeling pretty wary as various All Blacks and the All Blacks team themselves certainly hold more than a few RWC records… Richie Mckaw is the only captain to have ever had two consecutive RWC wins. Mark Ellis is the only player to have scored a double hat trick (6 tries) in a single RWC game when the All Blacks beat Japan 145 to 17 in 1995. The late and great Jonah Lomu, jointly holds the record for the most tries scored in a RWC tournament.

The All Blacks are also the only team to have ever won 3 Rugby World Cups… and like everyone else in the country – everyone here at Hamptons will be crossing our fingers and toes and hoping that we can take that tally to 4 in Tokyo!!!

In our last issue of Hamptons Happenings, we showcased the latest self-building technology that is used to construct everything from pop up (and out) houses, bridges, hotels, solar panels, shops, stadiums, medical centres and more…

This month, we’re sticking with our Rugby World Cup theme and showcasing the very latest construction robots in Japan.

If you’re an account holder at Hamptons ITM either email Mata at admin@hamptons.co.nz or give us a call on 03 374 3333 and simply tell us:

The winner of our competition will take away the Hamptons ITM motorised chilly bin, filled with some other fantastic (and of course very useful) giveaways!

On Thursday the 3rd of October from 1:30 – 3:00 pm Hamptons ITM will be hosting a demonstration of the new shadow clad stick and shadow clad APP.

Members of the team at Hamptons ITM will be on hand to help answer your questions on the day.

Come along and claim LBP points toward your LBP skills maintenance scheme.*

We look forward to seeing you there…

Click on the video below to watch a video with this month’s Hot Hamptons Deal covering the incredible range of Makita outdoor power equipment.

Click here to follow @Hamptons_ITM to keep up to date with our latest news, promotions and Hamptons Hot Deals…