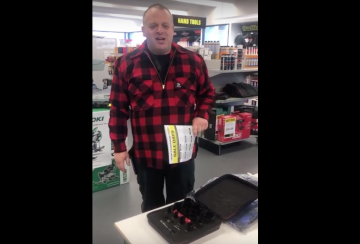 Welcome to the June edition of Hamptons Happenings.

In each issue of Hamptons Happenings, we’re telling you a bit more about each of our Hamptons Heroes …

This month is no exception and we are very excited to share some information on our resident “lock-picker” Ilona Rielly.

Ilona was born in Christchurch and grew up in Linwood. Ilona has 2 sisters and a brother.

While at school, Ilona’s favourite subject was sport of any kind (literally)… Ilona was never happier than when she was running around playing netball, softball, volleyball, swimming, badminton and the list goes on…

Ilona was never a huge fan of actual schoolwork. In fact, Ilona was sitting in the middle of a school exam at Linwood High when someone walked in (right in the middle of the exam) and asked if they could speak to her…

Ilona and Bob Bull the owner, quickly developed a healthy respect for each other and he asked her if she was interested in becoming a Locksmith. Never one to shy away from a challenge, Ilona went on to complete her 6,000 hour apprenticeship in Locksmithing.

More recently Ilona spent over 9 years on the road covering the South Island as a sales rep for Assa Abloy. Assa Abloy are the world leader when it comes to door hardware and are behind brands like Yale, Lockwood and Interlock.

Family is very important to Ilona and Hamptons are very lucky that a couple of years ago Ilona decided she needed to find an opportunity closer to home with less time spent out on the road.

Ilona’s skills often come in handy and she’s a wealth of knowledge if you ever have any questions about locks or door hardware. She’s also very useful (as David Fleming discovered) when you arrive at Hamptons and don’t have your keys to the office!

In our last issue of Hamptons Happenings, we showcased the latest exo-skeleton technology to save your back on the building site.

In this month’s edition, we showcase an incredible piece of new building technology that was developed at Waikato University. It is called self-healing concrete. The concrete that regenerates and heals itself, made using nanobiotechnology that  was developed right here in New Zealand.

The breakthrough research was championed by Dr Aydin Berenjian​ and PhD student Mostafa Seifan​ at the University of Waikato.

Imagine, no more unseemly cracks in your concrete. Instead the concrete detects the exposure to air and the nanobiotechnology kicks in and the concrete sets about healing itself!

Which Building Material is made primarily out of earth and organic substances?

Email your answer to admin@hamptons.co.nz or message us on Facebook with your answer and go into the draw to win the Hamptons ITM Mystery Prize Pack for June.

On the 18th of July, from 8am to 4pm ITM have organised a Licensed Building Practitioner training day.

By attending you will receive 6 Elective Points!

The training will be held at Addington Racecourse, Christchurch. Drinks and nibbles will be available at the end of the day and there will be various prizes.

We look forward to seeing you there!

Here’s a short video featuring Rowan, our very own guru on tools and Hunt for the Wilder People understudy…