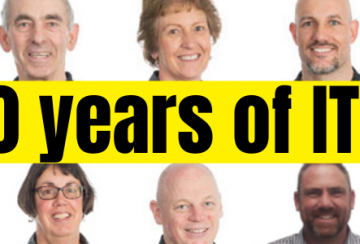 On some fronts, 2021 is (fingers crossed) shaping up to be a great year, and we are especially excited as 2021 just so happens to be the ITM group’s 30th birthday.

We hope you will join us in the coming months as we celebrate our birthday, and as you’d expect, there will be plenty of sharp deals along the way – keep an eye on our social media and website for the bargains.

Before we get too carried away with our celebrations, we’d like to share some of the back story of the ITM group and why we think 30 years is a milestone worth celebrating.

Back in the hazy days of 1991 ITM came to be, independently owned businesses combining together to create strength to get a competitive deal. From the very start, store numbers grew steadily, and as ITM’s first CEO Kevin Marevich (CEO 1991-2001) fondly remembers “The competition didn’t take us too seriously until it was too late and by then the horse had bolted”. Hamptons ITM was one of the stores that joined at this time, becoming an ITM in 1992.

ITM continued to evolve and maintain the sense of being fresh and exciting as we plugged into the same things that our customers loved – the ITM Fishing Show, ITM Cup and ITM 500 – the holy trinity of fishing, rugby and motor racing. We have a number of customers who are huge fans of the ITM fishing show and the iconic Matt Watson.

The last 10 years has seen the ITM group continue to grow (despite the GFC, earthquakes, and a global pandemic!). ITM now have 95 stores across New Zealand, from Far North ITM Mangonui (a pretty good spot for fishing we hear) down to E H Ball ITM in Invercargill (Bluff oysters – need we say more?). While each ITM store retains its independence and unique personality, they all deliver that same “we’ll see you right” approach and philosophy to our loyal customer base. We think this independence and personality is what makes ITM special, and much like our customers, each store is quite unique, but the thing that binds us all together is the fact that customers get to deal directly with the decision-makers, and ‘real people’ rather than a corporate machine.

As we all know, thirty years can go by pretty fast (as someone who has a 50th birthday on the horizon – I’m speaking from experience) and it already feels as though ITM has always been here. But we are still youthful in our approach and outlook as we continue to move with the times and further evolve to an everchanging future. As the market continues to change, so too will ITM, and no doubt we will be writing to you in no time to celebrate our 40th birthday. In the meantime, let’s reflect on these first thirty years and what we have achieved and look forward to the celebrations that will unfold over the coming months.

The excitement is building as we all look forward to the much anticipated, start of the America’s Cup.

As you will recall ITM are a Team New Zealand exclusive supplier and Hamptons was lucky enough to have a couple of Team New Zealand crew members speak at the official re-opening of our Ferry Road premises.

Hamptons have had a few customers who have used their ITM Trade Club points to get out on the water and watch the Prada Cup from ITM’s spectator boat. They have reported that seeing the flying boats travelling at 3 to 4 times faster than the wind and close to 100km/hour, is most definitely a sight they will never forget.

Here is Rowan talking about the Makita Hot Deal for March. Come in and see us to snag this bargain – and to check out what other new products we have in store.

On Saturday the 10th of April Hamptons will be hosting the ITM sponsored Apprentice Challenge.

If you, or someone you know is keen to be part of the action check out:

Eventually, a man dressed like an accountant in a dark suit walks up and shakes his hand, pats him on the back and says “congratulations Trevor!”

Trev is a bit embarrassed and confused and says, “sorry mate, congratulations for what?”

“Trevor, we’re all here celebrating the fact that you lived to the grand old age of 160.”

“That’s impossible Trevor” says the accountant. “We added up all your time sheets!”

Take care out there…